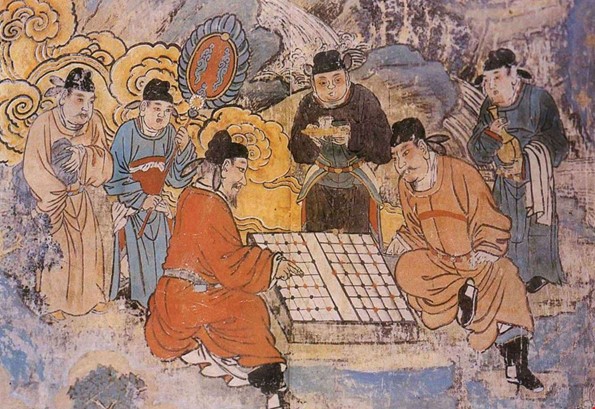 Xiangqi or what other people call it Chinese chess is unquestionably one of the most popular strategy-based board games in the world.

The game represents a massive battleground between 2 different nations. And the main objective is to conquer the opponent’s king.

But you might ask – how did it all begin? Who made this game? Well…

Some people believe that Xiangqi firstly originated from India, while others think that the origins of this game firstly appeared in China.

We’re here to break up the entire history of Xiangqi just for you! Let’s start – shall we?

Chapter 1: How It All Started?

By following recent research, we’ve managed to see that Xiangqi initially evolved from an ancient Chinese game called Liubo (a game that was invented 3,500 years ago). It involves two players who game by using counters, gaming pieces, and dice. It’s quite similar to backgammon.

The first person that played Liubo (the game which Xiangqi evolved from) was the mighty Emperor Shang W. Yi. He used to love this game and spent hours learning new techniques.

During the whole Han Dynasty (206 –220 CE), Liubo evolved into a game called GeWu. The GeWu game had the same rules, but there was one major change that made it one step closer to Xiangqi. Unlike Liubo, this game didn’t have any dice, making it completely skill-based.

The Rise Of Xiangqi

And finally, the first reference to the original gameplay of Xiangqi comes from the Tang dynasty (618-907 CE). In this storyline, Cen Shun dreamed that he was visited by a special message carrier of the Golden Kingdom. The carrier told Cen they had a big war with the Tian Na Kingdom and asked if he wanted to participate in the entire battle.

After Cen’s approval, his entire room turned into a battle compound, and he became the new king. In his dream – all of this felt so real. After only several minutes, a military adviser approached Cen with a remarkable war-based strategy.

He told him that the flying horse (mighty-knight) should go on a diagonal line and stop at the third line, the generals are allowed to move throughout the whole ground, the wagon (rook) must go straight into the enemy’s field, while the regular soldiers shouldn’t move sideways.

Cen followed the advice and managed to win the world in a really fast period of time. Later that day – he made a board game that used the same strategy as the adviser and decided to call it Xiangqi.

But, we also have to mention that the term Xiangqi was mentioned repeatedly in several different pieces of literature in Chinese history.

And in another collection of stories and anecdotes, “Meng-Changjun” was described as playing the Xiangqi game and dancing with Zhengy.

So, not only does this prove that Xiangqi is Chinese, but it also states the fact that the game has been played for many generations.

Speaking of literature, Cheng Jing wrote a simple poem on Xiangqi called “Xiang Xi-Shi.” In this special posting, he mentioned that the game contained generals, wagons, horses, and pawns.

Similar to the Liubo, the game is played on an 11×11 board with 32 elements. The entire game required a lot of skills. There are a lot of techniques that you can use to your advantage.

In terms of game time, Xiangqi can be played for as little as 20 minutes and even up to several hours – depending on the flow of the game.

But, as time went by, the game significantly improved and received a new redesign as well. This way – Xiangqi becomes a lot more enjoyable to the players. You can find most of the rules here.

Even though the game has its main origins in Asia, there are a lot of Xiangqi players and clubs all over the planet.

Now, you can find the game everywhere – from local stores to online suppliers; the options are endless.

And what’s even more interesting is that you can even play Xiangqi online. Here’s a link if you’re interested – it’s completely free.

That’s all for today, folks! Positively, now you have a much better understanding of Xiangqi’s brief history.

Xiangqi has certainly made a big mark in Chinese history. It first appeared as Liubo around 1140 BC but has managed to evolve into the game we know today in just a short period of time.